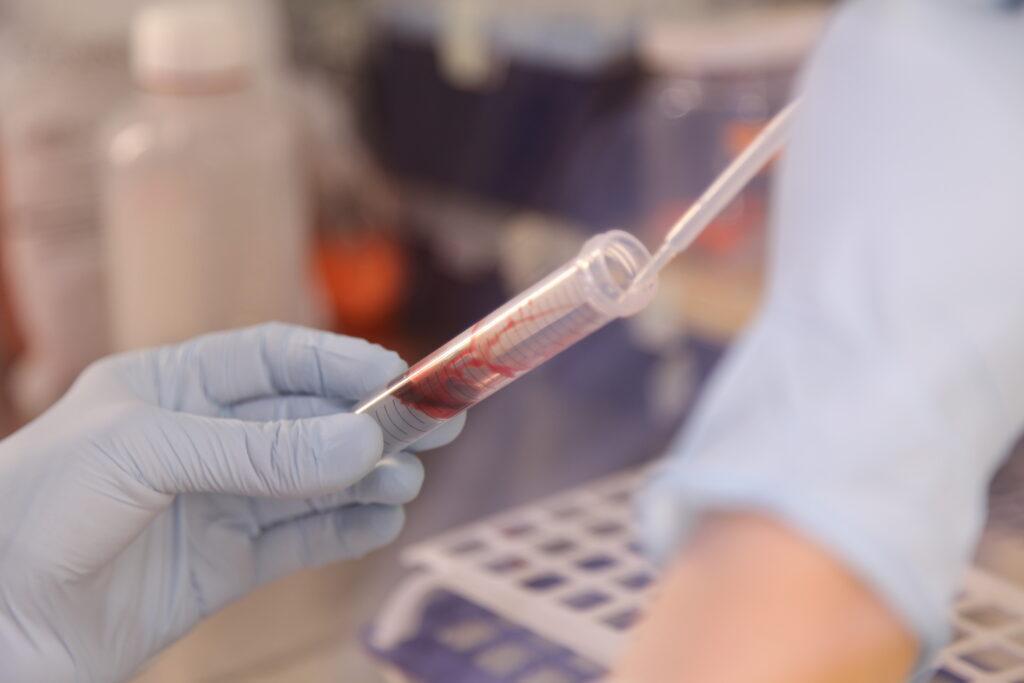 Research conducted at Barts Cancer Institute (BCI), Queen Mary University of London, indicates that regular blood tests before and during chemotherapy for prostate cancer can detect whether or not a patient is resistant or developing resistance to treatment with a drug called docetaxel. Ms Caitlin Davies, a PhD student at BCI, presented the findings from her PhD research at the National Cancer Research Institute (NCRI) Festival, which is taking place from 8-12th November 2021.

Docetaxel is a chemotherapy often used to treat men with prostate cancer that has started to spread to other parts of the body (metastasised) and does not respond to therapy to lower levels of the hormone androgen. Docetaxel can significantly improve survival; however, some patients are resistant or acquire resistance to the drug.

Ms Davies - who is a member of Professor Yong-Jie Lu’s laboratory group at the BCI - and colleagues investigated if it would be possible to identify docetaxel resistance and predict survival from the number and types of cancer cells that have detached from the tumour and entered the bloodstream (known as circulating cancer cells or CTCs).

The team collected and analysed CTCs in blood samples taken from 56 patients with advanced prostate cancer who were being treated at St Bartholomew’s Hospital in London. The samples were collected before, during and after treatment with docetaxel, which allowed the researchers to monitor changes in CTCs in response to treatment.

The team looked for patterns in the data from patients who responded to treatment or did not, or whose cancer progressed sooner than others’ did after treatment.

The researchers found that if more than six CTCs per 7.5mL of blood were detected before the first docetaxel dose, patients were less likely to respond to docetaxel, their disease was more likely to recur or progress within three months, and they were more likely to die within 18 months. This compared to progression-free survival of 17 months and an overall survival time of three years for patients with fewer than six CTCs detected per 7.5mL of blood.

The team also found that the type of CTCs present within the blood samples could predict disease progression and survival, and that high numbers of CTCs towards the end of treatment predicted a shorter time to cancer progression and death.

“Using these patterns, we can apply them to future patients with the goal to predict whether they will respond to therapy and pre-emptively decide on the best course of action that will have maximal benefit. For instance, an increase in CTC numbers may indicate a lack of response to treatment.”

This way of testing for CTCs in blood samples is known as liquid biopsy, and means that patients can avoid undergoing painful tissue biopsies. The findings suggest that monitoring CTC numbers and dynamics could enable doctors to detect early on, without invasive procedures, if a treatment is working and switch to alternatives if it is not.

“Although these results are highly promising, they require further validation in a larger group of patients, perhaps in a clinical trial.”

The findings from Ms Davies’ research were made available as an e-poster at the NCRI Festival yesterday, Wednesday 10th November 2021.

The Medical Research Council, part of UK Research and Innovation, is funding the research.

Read more about the findings from this research in the NCRI press release.