A flu-like virus has now been used in experiments to successfully inhibit the growth of pancreatic cancer, according to an early study by researchers at the Barts Cancer Institute (BCI) of Queen Mary University of London (QMUL).

The study funded by the charity Pancreatic Cancer Research Fund, led by Dr Gunnel Halldén based at the Centre for Molecular Oncology, and including UK colleagues at Cardiff University, suggests that the new technique could potentially become a promising new treatment for patients with the aggressive disease, and could be combined with existing chemotherapy to improve chances of survival.

First author Dr Stella Man, the post doc who carried out the research said: "We’ve shown for the first time that pancreatic cancers can be specifically targeted with a modified version of the adenovirus virus."

The new virus specifically infects and kills pancreatic cancer cells, causing few side effects in nearby healthy tissue. Not only is our targeting strategy both selective and effective, but we have now further engineered the virus so that it can be delivered in the blood stream to reach cancer cells that have spread throughout the body.

If we manage to confirm these results in human clinical trials, then this may become a promising new treatment for pancreatic cancer patients, and could be combined with existing chemotherapy drugs to kill persevering cancer cells. 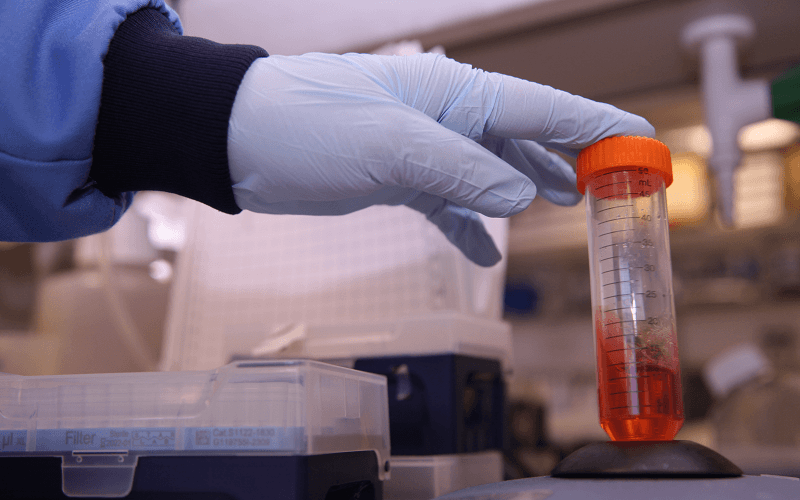 Each year around 9,800 people in the UK are diagnosed with pancreatic cancer. The disease is particularly aggressive and has the lowest survival rate of all cancers – fewer than five per cent of patients diagnosed survive for five years or more.

The reasons behind the poor survival rates include late diagnosis of the disease and the cancer’s rapid development of resistance to current therapies. To avoid drug resistance, the use of mutated viruses has emerged as a promising new strategy for attacking cancers in a more targeted way.

The team modified the adenovirus to display an additional small protein on its outer coat that recognises and binds to αvβ6-molecules. Once the virus enters the cancer cell, the virus replicates, producing many copies of itself prior to bursting out of the cell and thereby destroying it in the process. The newly released viral copies can then bind onto neighbouring cancer cells and repeat the same cycle, eventually removing the tumour mass altogether.

The researchers tested the viruses on human pancreatic cancer cells, which had been grafted onto mice, and found that they inhibited cancer growth.

The concept of using modified viruses has previously shown promising results in various cancers including brain, head and neck, and prostate. The researchers say that their new virus is more specific and efficacious than previous viral versions, and has the added advantage of being able to co-operate with chemotherapy drugs that are currently used in the clinic.

The virus is further modified so that it is unable to cause disease in healthy individuals.

It’s exciting to see research we’ve funded at Barts Cancer Institute since 2009 – both in modifying viruses as a potential treatment for pancreatic cancer and progressing knowledge about alpha v beta 6 – come together in this study with such positive results. Developing more effective treatments for pancreatic cancer becomes more urgent every year as the incidence of the disease increases, and we hope to see this research progressed further.

Currently, we are seeking new funds to support further development into clinical trials within the next two years. With this funding in place, early phase trials will usually take about five years to determine whether or not the therapy is safe and effective.

This is an exciting advance, offering real potential for patients with pancreatic cancers, as well as other cancer types, that express αvβ6 integrin. It is likely that additional refinements to the virus may further improve the potential to effectively target tumours via the bloodstream, and that the therapeutic effects of the virus can be enhanced by engineering the virus to overexpress therapeutic agents to stimulate the host immune system to fight back against the cancer. We look forward to developing these ideas moving forwards and extending our productive collaboration with Barts Cancer Institute.