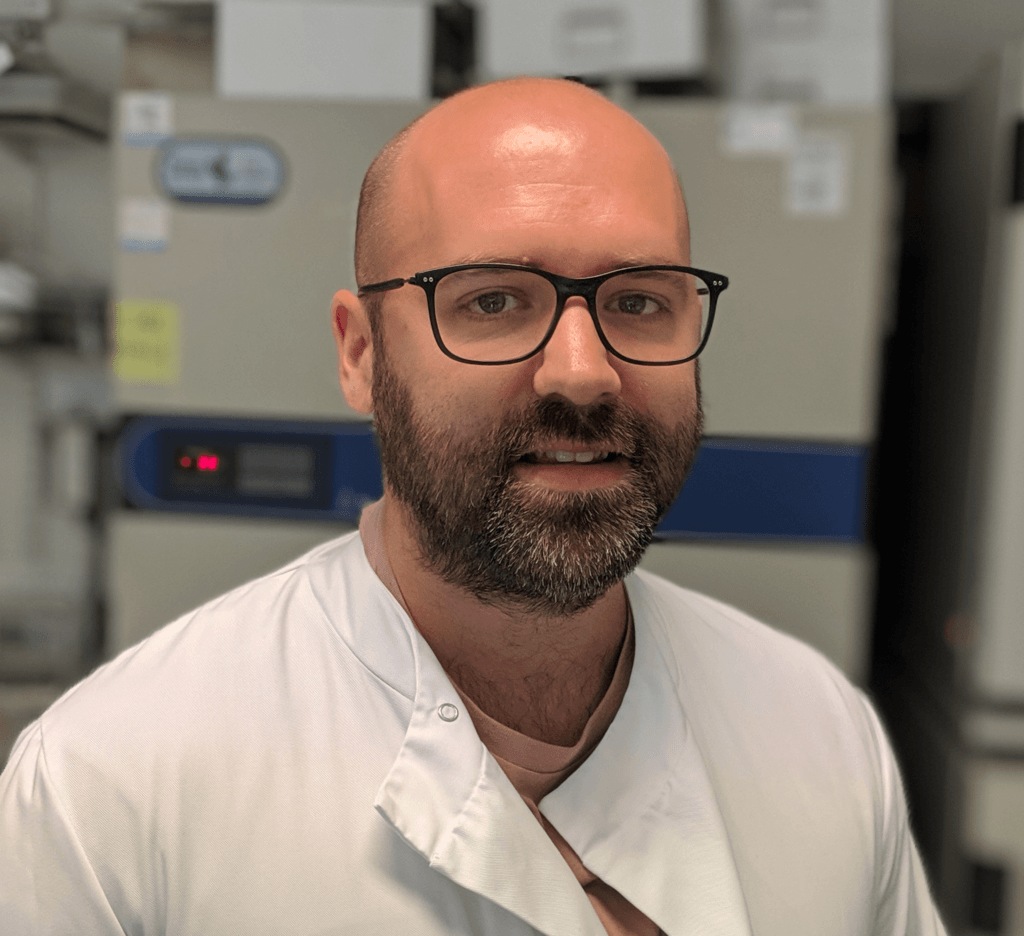 We are pleased to welcome Dr Barrie Peck to the CRUK Barts Centre as a new Group Leader. We recently spoke with Barrie to find out more about him, his research and the work he will be doing on cancer metabolism.

Barrie undertook a degree in Molecular Biology and Genetics at Royal Holloway, part of the University of London, where he completed a BSc project looking for MEK orthologs in Giardia Lamblia with Dr Mark Crompton. Barrie then went to Imperial College London where he completed a PhD in Molecular Oncology, studying signalling cascades in breast cancer, focussing on the forkhead transcription factors.

Since completing his PhD, Barrie has had two postdoc positions. The first was at the London Research Institute (now the Francis Crick Institute) studying cancer metabolism in the lab of Professor Almut Schulze, and the second at the Institute of Cancer Research (ICR) in the lab of Dr Rachael Natrajan, where they developed a novel 3D functional genomics pipeline. The lab at the ICR expanded rapidly after Barrie arrived and he was heavily involved with training and supervising the new team. This really convinced Barrie that he wanted to have his own group, which he will now be establishing here at the CRUK Barts Centre.

What inspired you to become a cancer researcher?

I really like solving problems and puzzles and I see understanding cancers and successfully treating them like trying to solve a rubix cube. Some are simple, with 6 sides/colours which have 9 squares, requiring a few moves to be solved, but unfortunately, some are really complex with 20 sides with 100 squares, and every time you try to understand them and make a move, the colours all jump around and you have to start again. Unfortunately, in cancer the more complex the disease the less time you have to solve it. I genuinely think cancer is one of the most complex problems we as a society have to solve.

On a personal level, like most people in cancer research I have seen many people who I have loved dearly suffer from and eventually die of the disease, the one having the greatest impact on me being my mother, who I spent a year looking after before she died of metastatic breast cancer. That experience really galvanised my commitment to make sure that there will be a day when people who have the same bad card she had, have a better outcome.

What will your lab group here be investigating?

My lab will focus on studying cancer metabolism and translating our findings into the clinic. Cancer metabolism is re-emerging as an area of research that can wield novel anti-cancer targets. An issue in the field though is that metabolism is heavily impacted by extrinsic factors, such as nutrients from the diet, which could potentially negate any benefit of targeting proteins in these pathways (The Nomura DK et al 2011 paper on MAGL is a perfect example of this). We will be attempting to understand this impact, turn it on its head and exploit it so that diet can be used to increase treatment efficacy.

What do you think the next 5 years will bring for your research?

I think it’s evident that if we want to truly embrace the era of personalised medicine in cancer research then we have to consider as many factors as possible to increase the number of people surviving their disease. Dietary modulation to aid cancer treatment is currently on the periphery of cancer research, yet dietary regimens are used to treat other metabolic diseases, such as GLUT1 deficiencies in children. Over the next 5 years, diet and cancer will become more mainstream and we aim to be at the forefront of that research.

What’s your favourite part of your job?

Meeting smart, like-minded passionate people who have solved real world problems. In the last few weeks I’ve talked with current and new collaborators in the UK, Germany, Belgium and the US. I think people often overlook the power of community in science but it’s an aspect of research I really enjoy.

What skills and expertise can you offer colleagues?

I have worked on functional genomics and cancer metabolism for over nine years, with a particular interest in 3D models, lipid metabolism and ROS detoxification, so if you have projects that meander into these areas I think I could help and am happy to.

What do you do to relax?

I have two young children so most of my spare time revolves around making sure they are healthy and happy. My wife is originally from Brazil so we spend a lot of our holidays there visiting family. I’ve really bought into the “relaxing in a hammock by the pool” lifestyle.

What are colleagues least likely to know about you?

I once got hit/slapped by a pink dolphin in the Amazon River – true (and painful) story. I speak Portuguese (although I’m told by my son that my accent is really funny).

We look forward to seeing what the future holds for Barrie and his research on cancer metabolism as he grows his laboratory group here at the CRUK Barts Centre.