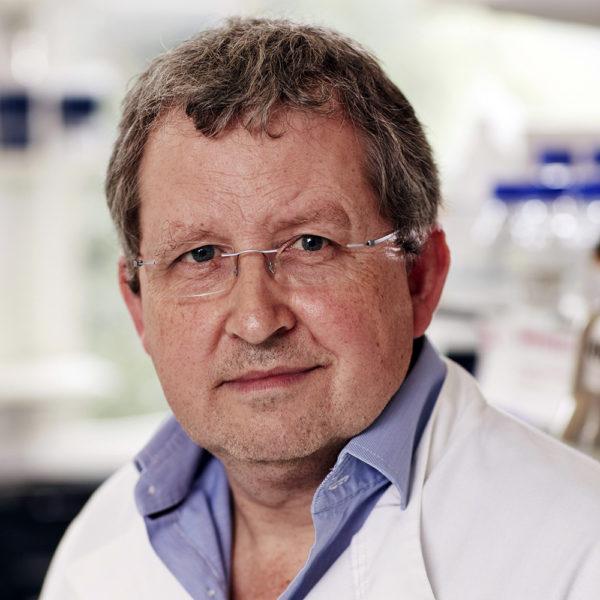 I study the biology of tumour invasion with a particular interest in the roles of the adhesion molecules expressed on the cell surface that mediate this process. Our group concentrates on the study of integrins that are the principal family of adhesion molecules that mediate interaction between cells and the extracellular matrix (ECM).

Integrins deliver spatiotemporal signals into cells after attachment to ECM proteins. These signals determine whether cells differentiate, move, remain stationary, secrete proteases, invade or deliver a combination of such signals.

The activity of specific integrins on cancer cells and tumour-promoting elements of the microenvironment (e.g. endothelial cells) are required for tumour progression. For several years we have concentrated on the role of integrin αvβ6. This epithelial-specific integrin is not detectable on most normal tissues but may be upregulated during tissue remodelling (e.g. chronic wounds, cancer).

Our activities include pathology, biology and translational studies.

Pathology drives our direction in biology. In our study of about 3,000 breast cancers, together with Prof Louise Jones, we have found that αvβ6 was expressed strongly by 17% cases and was associated significantly with reduced overall survival, particularly if HER2 was also upregulated.

In separate studies, we established that 90% of pancreatic cancers express αvβ6 whereas normal pancreas expresses very little or none. Thus αvβ6 is an important new therapeutic target in many cancers. By understanding its biology we are developing novel therapies.

To improve studies of invasion, we re-developed and made quantitative a 3-dimensional organotypic invasion assay that better reflects tumour:stroma interactions. This assay now is used by invasion labs globally.

We were the first to show that αvβ6 promoted carcinoma invasion and did so, in part, by upregulating proteases that could degrade the ECM offering an explanation for the clinical observations. As αvβ6 activates TGFb and as this in turn can promote formation of cancer associated fibroblasts (CAFs) that help cancers develop, we have now developed significant interests in studying fibroblast biology in tumour progression.

Integrin αvβ6-directed imaging and therapy for cancer are major goals.

We have identified a peptide (A20FMDV2) that is highly specific for αvβ6. Since αvβ6 promotes TGFb-dependent lung fibrosis it is used by GSK in idiopathic pulmonary fibrosis studies (NCT02612051).  In addition, in collaboration with Imanova, our IMPACT trial is using 18F-A20FMDV2 for imaging solid cancers. In July 2018, again with IMANOVA, our new IMETAB6 trial opened. This study will analyse the levels of αvβ6 in the breast tumours and blood of women with metastatic breast cancers.

Our attempts to develop αvβ6-directed therapies continues and is centred on αvβ6-inhibitory antibodies that we have characterisedand we hope will eventually enter clinical trials.

Current perspectives on the use of off the shelf car-t/nk cells for the treatment of cancer Cutmore LC, Marshall JF Cancers (2021) 13(7)

My career in research science began in the Tissue-Interactions Laboratory of Imperial Cancer Research Fund (now Cancer Research UK) in January 1983. I learned to develop bladder organotypic gels, separating the urothelium from the underlying stroma and recombining them as required.

Using bladders from carcinogen treated rats, we found the stroma was the more powerful reservoir of pro-tumourigenic development than the epithelium. Others in the lab identified stromal fibroblasts as a key component. Given that the major site for progress in understanding tumour biology is the Tumour Microenvironment this initial 2 years gave me an intellectual and practical head-start that I still use in my research today.

I moved within ICRF to study Invasion and Metastasis with Ian Hart in 1984. I spent 6 years developing Phthallocyanine Photosensitizers for laser activated tumour therapy and during this time studied for an MSc in Medical Immunology (University of London) and also an MPhil before moving onto studying adhesion.

I then studied integrins in melanoma providing one the first comprehensive studies of the numerous integrins that melanoma cells upregulate as they transform from melanocytes. Specific study of uveal melanomas (of the eye) revealed the discovery of a previously uncharacterised integrin, αvβ1. On the same day I realised my discovery, a paper in Nature published the discovery of αvβ1, followed by another in Science within a week. The Melanoma integrin work formed the basis of my PhD.

I moved from melanoma to carcinoma in 1998. I co-supervised a PhD student whose work resulted in the first description of the epithelial-specific αvβ6 as a pro-invasive integrin that regulated matrix-metalloproteinases. This student is now Professor of Oral Pathology in the University of Southampton. Since then my team has largely concentrated on this integrin, using it as a paradigm for the study of integrin-dependent pro-invasive biology.

Several groups, including our own, have shown clearly that αvβ6 is not expressed by normal tissues but is upregulated in many carcinomas where its expression correlates with extremely poor survival. Thus our studies are designed to dissect the cell and molecular biology of αvβ6 in order to develop novel therapies.

The Centre for Tumour Biology arrived at Barts in August 2006. Since 2007 I have been designing and teaching Research Skills and Sciences on 2 MSc courses among other teaching for QMUL. In that same time we have developed αvβ6-specific targeting agents some of which are being developed for clinical trials.

For over 10 years I have been privileged to work closely with DebRA. Patients with recessive dystrophic Epidermolysis Bullosa have a 70-fold increased risk of skin cancer and, unlike in non-EB patients, these, mostly αvβ6-positive, cancers metastasise and kill most patients.

More recently I have begun to work with Breast Cancer Now and the Pancreatic Cancer Research Fund (PCRF) and Pancreatic cancer UK, in part, because fatal cancers in these patients also often expressed αvβ6 strongly. Since αvβ6 is not expressed strongly by the corresponding normal tissue, success of any of our therapeutic programmes could translate to treatments for many of these patients.

I hope and expect the next few years to be very exciting.