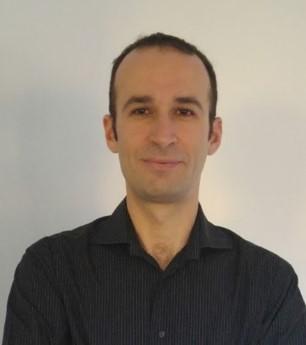 My research interests focus on mechanisms of disease initiation and maintenance and the identification and validation of novel therapeutic targets in myeloid leukaemias. Specifically I study the role of adaptive responses to current therapies, including novel targeted therapies, in several subtypes of myeloid leukaemias and at leukaemic stem cell level, with a specific focus on the role of metabolic adaptations, as a mechanism of resistance not driven by genetic mutations.

Acute myeloid leukaemia (AML) is the most prevalent acute leukaemia in adults and a cancer of unmet need with long-term survival rates of less than 30%. Sequencing and mechanistic studies have improved our understanding of the biology of several subtypes of myeloid leukemics. This has in turn resulted in the development of more targeted and scientifically validated therapies. However, the overall treatment outcomes, even with the introduction of novel agents, remain suboptimal for most patients, mainly as a result of disease relapse. AML arises in a haematopoietic stem or progenitor cell, which has the ability to self-renew, following the acquisition of recurrent driver mutations. This cell of origin, usually named the Leukaemia Stem Cell (LSC), represents the reservoir for relapse due to its inherent or acquired resistance to current therapies. Therefore, an improved understanding of the molecular mechanisms causing disease relapse, particularly at the LSC level, is required to improve patient outcome.

My research interests focus on mechanisms of disease initiation and maintenance and the identification and validation of novel therapeutic targets in myeloid leukaemia and studies the role of adaptive responses to current therapies, including novel targeted therapies, in several subtypes of myeloid leukaemias and at LSC level, with a specific focus on the role of metabolic adaptations, as a mechanism of resistance not driven by genetic mutations. Metabolic alterations are a hallmark of AML, and are often responsible for the development of chemoresistance arising from the bottleneck of extreme metabolic stress during intensive chemotherapy. Several metabolic pathways have been reported by our groups and others to be essential for leukaemic cell maintenance and resistance to therapy. For example we have shown reliance on glutamine and other energy sources from bone marrow niche to feed tricarboxylic acid cycle activity, oxidative phosphorylation and glutathione generation to drive therapy resistance and the role of mannose metabolism in modulating the ability of AML cells to switch the majority of energy dependence on fatty acid oxidation in response to standard and novel therapies.

In the laboratory, we use a combination of forward genetic screening, functional and mechanistic studies to characterise the clonal dynamics in leukaemic cell populations under therapeutic stress, characterise the mechanisms leading to therapy resistance and identify novel therapeutic vulnerabilities to be targeted in combination with standard therapies. We are also interested in the bidirectional cross-talk between altered metabolism and aberrant signalling and transcriptional programmes and its role in the establishment of myeloid leukaemias. We specifically study how metabolic intermediates interact with transcriptional programmes/altered signalling in AML and conversely how specific driver mutations impact on cellular metabolism to enable leukemic transformation.

We use cell lines, primary patient samples and murine models and study the functional effects of targeting novel vulnerabilities by combining complementary approaches such as RNAseq, Proteomics, Phosphoproteomics, Metabolomics, Lipidomics, in vivo imaging and drug screening. 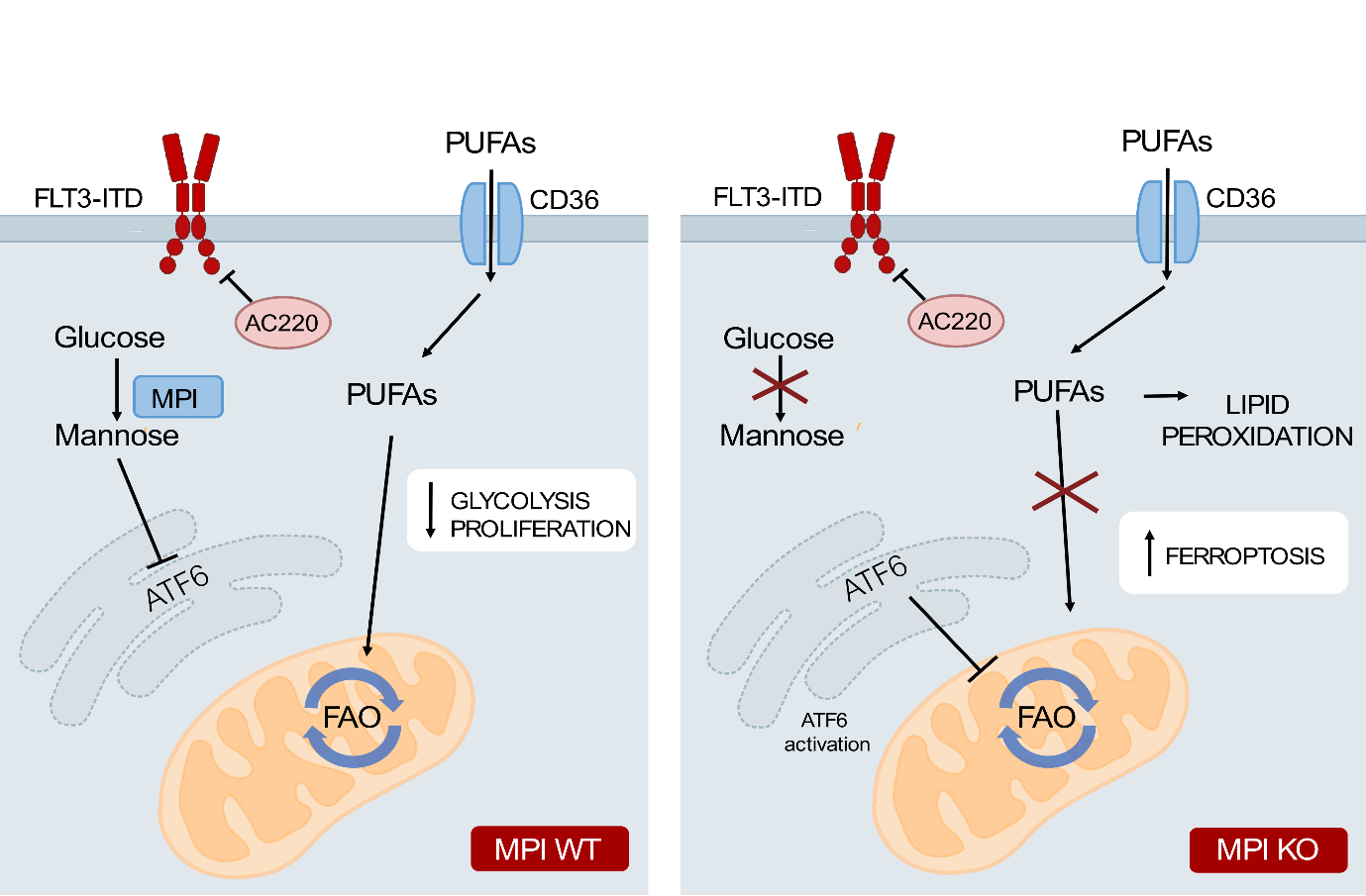 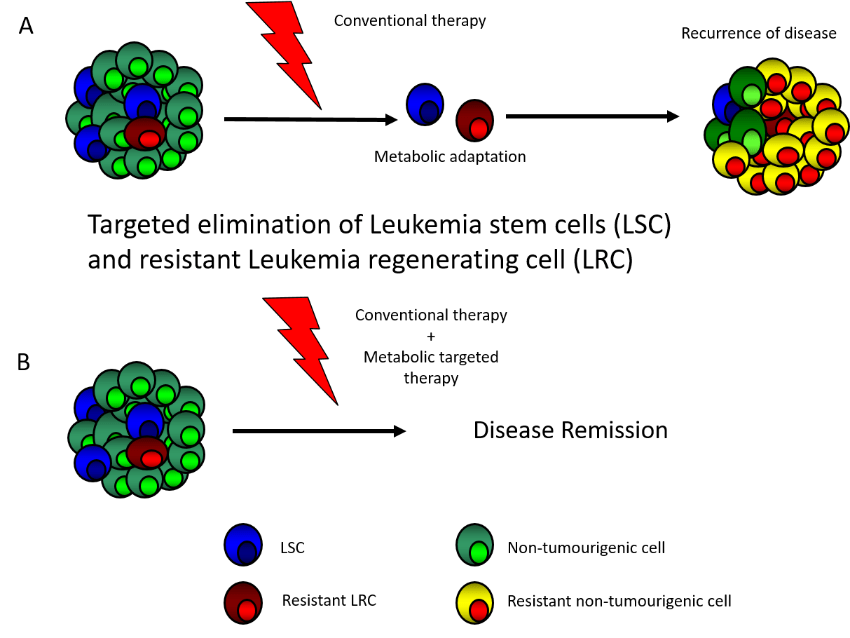 A) Standard AML therapy reduce disease bulk but do not eradicate resistant LRC and LSC which often utilise metabolic adaptations to survive and in turn lead to relapse. B) We aim to identify such adaptations and by targeting them promote durable remission and cure. 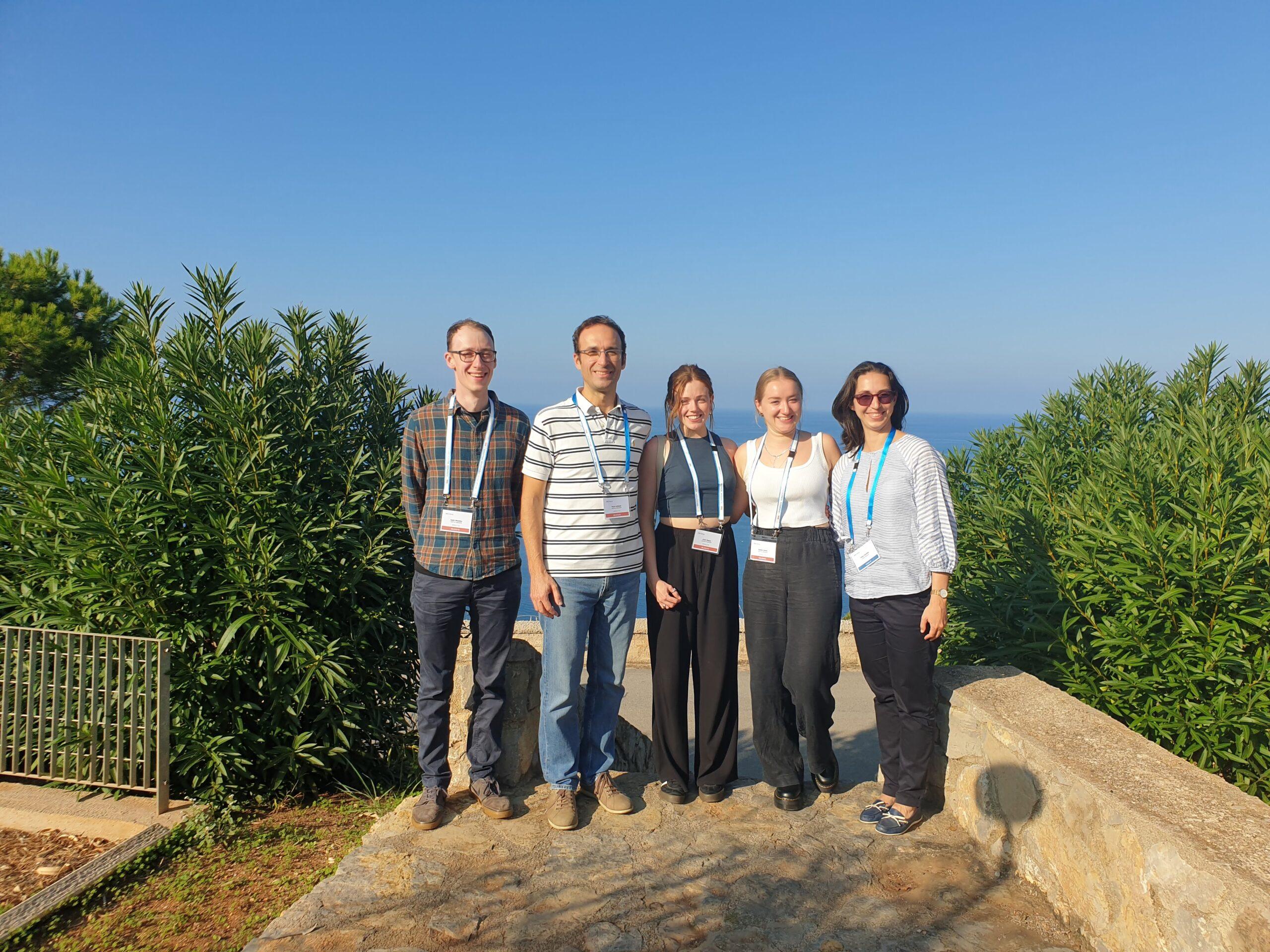 I am a clinical academic haematologist with an interest in the biology and therapy of myeloid leukaemias. I studied Medicine in Naples, Italy, where I graduated in 2002. I then moved to the UK for my postgraduate medical training including my Haematology specialty training. I obtained my PhD, funded via an MRC Clinical Research Training Fellowship, in Prof Holyoake lab in Glasgow in 2013, studying resistance mechanism of Chronic Myeloid Leukaemia (CML) stem cells to BCR-ABL tyrosine kinase inhibitors. I was awarded the Royal College of Pathologist, UK Haematology Specialty Research Medal Award for this work. I then moved to Cambridge to complete my specialty training and worked as a Wellcome Trust funded Clinical Post-doctoral Fellow within Prof Brian Huntly lab where I have developed an independent research line focusing on the role of altered metabolism in the pathogenesis and therapy of myeloid leukaemias. I am clinically active at Consultant level with a leading role on design and set-up of clinical trials through my membership of the NCRI AML and CML Working Group. I am already a principal investigator/sub-investigator on several clinical trials in myeloid malignancies. I moved to BCI in 2019 to start my independent research programme which is primarily funded by a CRUK Advanced Clinician Scientist Fellowship. Qualifications